The RAOUL-BARRIÈRE stadium in Béziers: Irrigation of a hybrid grass football pitch

The Raoul-Barrière stadium in Béziers holds 22,500 people and is used for both football (soccer) and rugby matches. In 2019 it was the home of the Béziers football club, then in Ligue 2 (French 2nd Division) and more recently in the Championat National (French 3rd Division). The stadium has only hosted rugby matches since 2021. In 2019, the sandy pitch at the Béziers stadium was ageing.  The installation was more than 30 years old and a decision was made to carry out a full renovation of the structure. The work was completed in the summer of 2020. 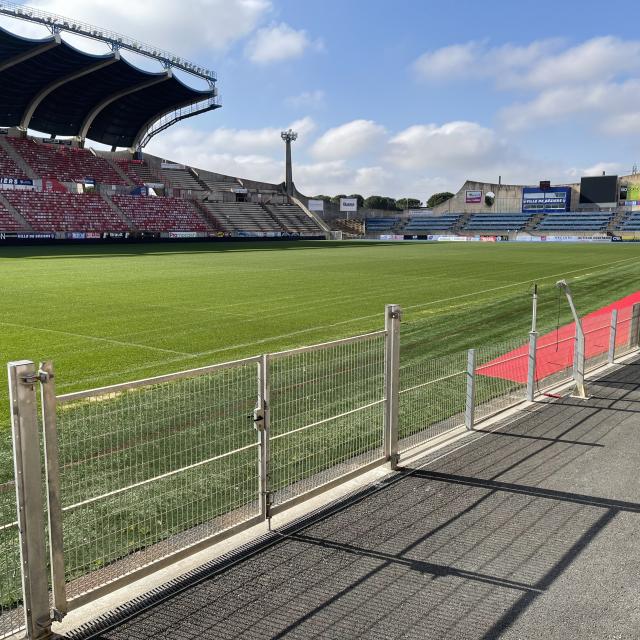 The task of upgrading the stadium is now finished, the work consisting of the laying of the turf, installing the irrigation system and the filtration unit.

In the course of the work, it was decided to replace the natural grass with a hybrid turf that uses SISGRASS technology, one of the latest innovations in hybrid grass pitches. It offers the quality of a natural grass combined with the stability and durability of a reinforced turf, and this for all seasons.

“The SISGRASS process involves having synthetic grass fibres implanted into the playing surface in order to reinforce the quality of the natural grass”, explained Gilles Dupuy, the Head Groundsman.

The substrate consists exclusively of very well-draining sand.  On a sand layer, the sown turf has the a appearence of a traditional grass pitch. One month later, the contractor intertwines the synthetic fibre using a large hybrid stitching machine over a period of 9 days.

The turf is made up of 95% natural grass and 5% synthetic fibres.

This kind of playing surface has a number of advantages:

• More playing hours: the pitch is never waterlogged when it rains, allowing for a shorter period of time between matches with a turf that holds up very well. The playing time of the pitch is 3 times longer than that of a traditional natural grass pitch.

• Playing quality: the quality of a hybrid turf is the same all year round: no wet areas, no clumps or clods, stable ground, the roots wrap themselves around the fibre, which prevents pull-outs.

• Safety for the players: the pitch is the same all over, witch means the players avoid getting injured.

• Longer lifespan for the pitch: the implantation of synthetic grass fibres allows for a better plant cover, thus prolonging the lifespan of the pitch.

Complete overhaul of the irrigation system

Mr. Dupuy explained: “We have more sprinklers on the new installation, which results in a more uniform irrigation”.

The installation is divided up into 5 sectors, each one independent of the others. All of the sprinklers are managed independently, even those in the middle, allowing for irrigation to be customized. “In this way, we avoid over-irrigating certain parts of the pitch, which are less dry than the others”, explained Mr. Dupuy.

And he added: “We have changed the rows of sprinklers. The sectors run parallel to the pitch, allowing us to optimize the sprinkling process in relation to the shadow of the stand”.

The installation is managed by two Rain Bird controllers of the ESP-LXD type, which are housed in the service room below the stand (one for the main pitch and one for the adjoining pitches). The controllers are connected to the Internet allowing for irrigation to be managed remotely.

The three adjoining pitches have not been changed. They have merely been connected to the new programmer and central control system.

The installation also includes a weather station, with a wind gauge and a rain gauge.  The weather station enables the operators to calculate the daily ETP (in manual control) and to conduct the hygrometric tests, allowing them to fine-tune the irrigation process.

According to Mr. Dupuy: “Irrigation management is a little tricky on this type of pitch. You have to irrigate a little more than you used to.  You have to be careful because the well-drained soils react very quickly to changes in temperature. You have to monitor the irrigation on a daily basis”.

As far as pitch maintenance is concerned, Mr. Jean Prauha, from the company CGME, explained: “Mr. Dupuy manages the irrigation system. We monitored the installation for one year and then we handed over the keys to the stadium managers”.

There is a service room under the stand, which houses the water intake, filtration system, bypass and controllers.

The water does not require any treatment; it is simply filtered at the intake.

Fertilisation as part of the maintenance of a hybrid grass pitch

The phyto-sanitary treatments are applied manually.

“We use granulated fertilizers during the cool periods, but when the weather is hot, from May to September, liquid fertilizers are injected into the irrigation system”, explained Gilles Dupuy.

As far as the pitch maintenance is concerned, “The new substrate changes the process completely”, explained Mr. Dupuy. “After the match, the grass has to be mown and the cuttings picked up and removed. It is all done manually, using a self-propelled mower.”

Gilles Dupuy is very satisfied with his new installation. Béziers has been named as the best pitch by the professional Top10 and ProD2 rugby leagues. 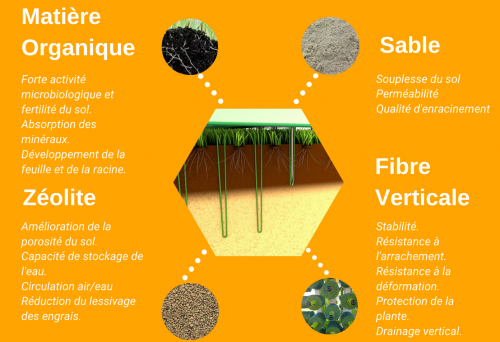 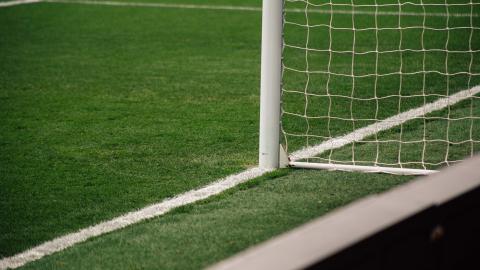