Ryder Cup 2018: A new irrigation system for The Golf National

It is widely stated that the Ryder Cup is to golf what the World Cup is to football. The Ryder Cup is the third most watched sporting competition in the world, after the Olympic Games and the Football World Cup. Players from the United States and Europe go head-to-head. The teams will be represented by the very best players from each continent. In the autumn of 2018, “Le Golf National”, located in France in the Yvelines region, will have the honour of hosting this prestigious competition. 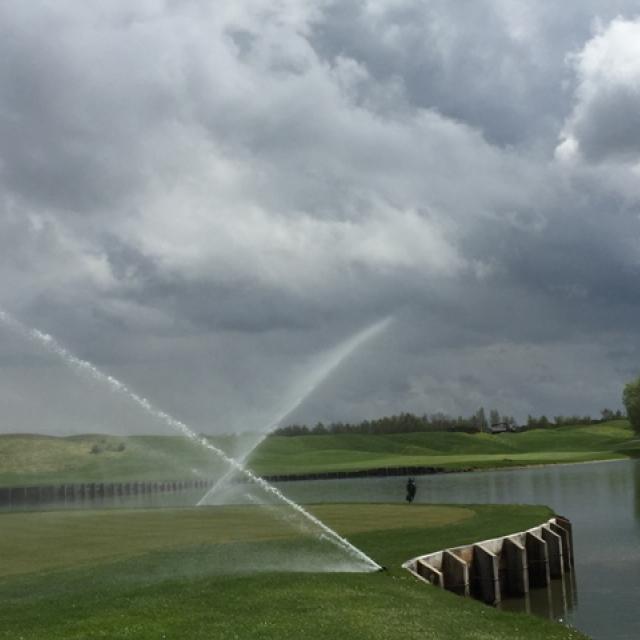 The Albatros course has been completely renovated in preparation for the Ryder Cup. The work supervised by Alejandro Reyes, who is very well-known in the golfing world, began in July 2015 and is in its final phase. Alejandro welcomed us to the Club House and explained that he was taken on 4 years ago especially for preparing the turf for such a prestigious competition. The total refurbishment of the golf course will cover the following criteria:

• The 2018 Ryder Cup will have 70,000 visitors each day. Extra roads and platforms had to be constructed to accommodate the spectators. Fibre optics and drinking water systems also had to be installed on the greens.

• The course has to be maintained at a high level throughout the year. A sprinkler system with total cover of the golf course had to be installed, as well as a “super” drainage system.

• The design of the course has been optimised, with the creation of new tees and new greens.

According to Alejandro Reyes, “The main modifications are concentrated around No 7 hole which has a new tee; the same applies to No 10, offset in order to have a line-of-sight for the water obstacle, and for 14, making it easier to line up the target. The famous par 4, reachable with one shot will now be the No. 13 with the possibility of having to negotiate some water obstacles”.
Didier Comte, from the company Imaginieur, has been taken on for all the irrigation work. And the companies Arrosage System (around 75%), Sirev (20%) and Est-Arro (the remainder) have been chosen to implement the project.

Yvon Cessou, from the company Arrosage System, accompanied me to the golf course. We headed for the Albatros course, which can only be used by the very best players, with a handicap of less than 20.

No 18 is located just in front of the club house, this being the final hole, which is consequently extremely important. There should be enough space for 70,000 people to be able to sit in front of this hole, in the grandstand seats, which will be put up just before the competition begins.

The No 18 hole runs around a lake and the green is situated on a small island, in the middle of the body of water.

Today “Le Golf National” has three golf courses, two 18-holes, the Albatros and the Eagle, and one 9-hole, the Oiselet.  The whole site has 5 large lakes and four or five small buffer or settlement ponds, which allow for the drainage of the surplus water. The presence of these water hazards can be explained by the clayey texture of the Parisian Basin, which has poor permeability and would have transformed the holes, surrounded by earth mounds, tussocks or natural formations, into veritable bathtubs. The water collected in these bodies of water is sent via underground pipes to the pumping station.

“On the Albatros, the new sprinkler layout allows for total irrigation cover of the course to be achieved”

The irrigation work was very important for the hosting of the 2018 Ryder Cup: All the pipes have been replaced on the courses as well as the sprinklers. There are far more new sprinklers installed, of the Toro Infinity type, than previously (on some fairways there are up to 5 rows) and they are laid out in triangular formation. This allows for a total coverage of the courses and a better coefficient of uniformity of the irrigation applications. This new sprinkler layout allows for a saving on water of up to 30%.

The whole system is now controlled by Toro’s Lynx® central control system. This intuitive user interface tool provides the consumer with all the essential information required for the irrigation system. Organised by zone or hole, the software enables you to control irrigation by setting the number of minutes the system runs or the application depth and to allow the system to calculate the other parameter(s). Thus the user will see exactly how much water is used and how long it will take to irrigate each zone.

Lynx provides a daily summary of the system’s performance and allows the user to identify rapidly the stations that are not functioning as predicted in the field report.

We then went to number 2 hole, a small par 3 where the new pumping station is installed. The company Solvert has subcontracted the work to a Polish firm. An ITC fertigation system has been added to the pumping station with a mixing tank situated below.

Near number 2 hole there is a large lake, allowing for the storage of the well water pumped up from the ground to irrigate the golf course. However, there is often a lack of well water. A drainage system has been laid out over the whole golf course. The drainage water is collected in the large drainage ducts/trenches and then it finds its way back to the lakes. A lot of research has gone into the drainage system so that it has the facility to handle heavy rains and even storms and thus it can drain all the areas of the 140-hectare golf course. On some fairways, it is still possible to see where the trenches were dug when installing the drainage system; these marks should disappear within 2 years.

We then went to the number 11 hole, a very picturesque par 3 hole with a large lake in the middle, completely redone in preparation for the Ryder Cup. The very best players can reach the green with one shot. On the fairway, we are able to spot a grey terminal, a point of connection for the software system, which controls the Toro Turf Guard sensors by radio. These tensiometers, located on the greens, allow water to be applied to the closest green, to the nearest millimetre. A green can have up to 8 probes. And a terminal can cover two greens providing they are at least 150 metres from the terminal.

While walking around the course, we were surprised by the almost total absence of trees. However, this is easily explained by the fact that the course had to be ready for play as soon as it was opened, so it was not conceivable to have to wait 25 to 30 years for the trees to grow. The very first French Open was held “in house” in 1991 three years after the golf was created.

And the golf club has a third course, the Oiselet, for beginners. The large practice range, where the Ryder Cup village will be established, is located near the Oiselet. Unlike a tournament, the Ryder Cup has a lunch break each day, which is obligatory and strictly adhered to. Therefore, the hunger of 40,000 people will have to be satisfied in two hours in seven or eight restaurants distributed around the course.

After being closed for 9 months while the work was being carried out, the Albatros is about to re-open. It will host the French Open from 30th June to 3rd July 2016. And of course we have the Ryder Cup in 2018. 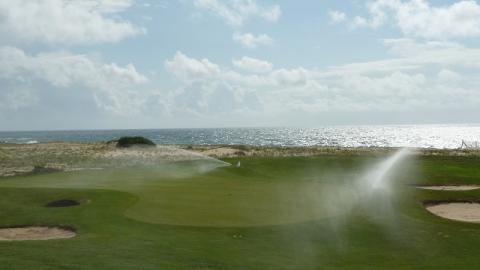 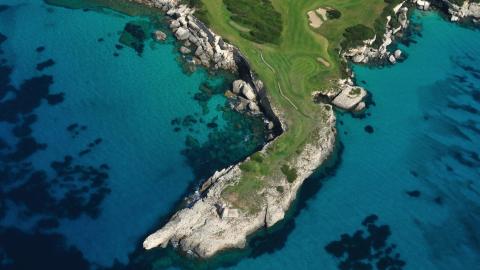 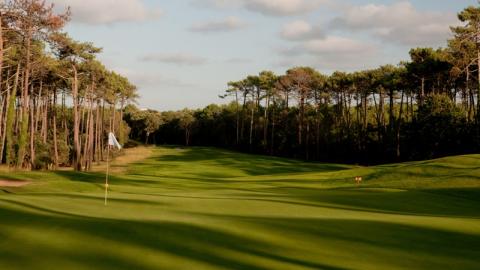