Last year, the Rodez Football Club waspromotedfrom the National League (Division 3) to Ligue 2 (Second Division). The city’s sports department has, therefore, decided to completely overhaul the Paul-Lignin football ground, with an extremelyambitiousproject: the stadium has been equippedwith a hybrid turf, an efficient irrigation system with central control and a temperature control system. 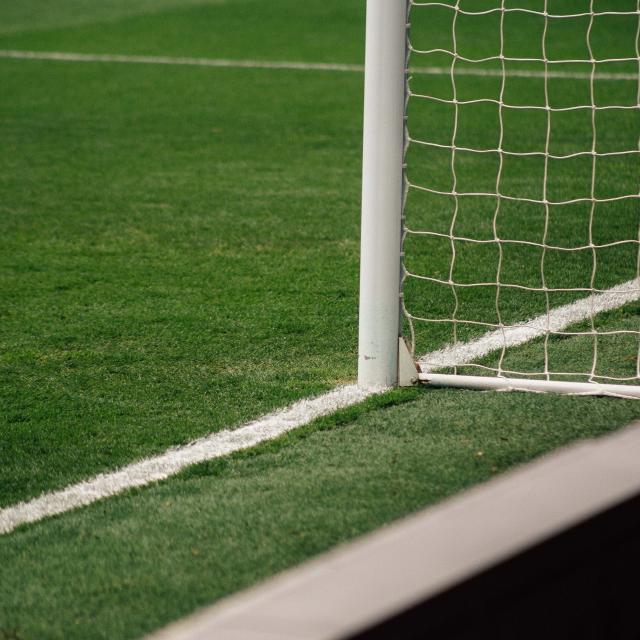 Wegot in touchwith Mr. Rouquié, head of the sports department for the municipality of Rodez, so that he could tell us about the changes made to the stadium and, in particular, anything related to the irrigation of the football pitch.

He began by explaining that it is a hybrid turf surface. There are several different playing surfaces:

• Traditional surfaces, consisting of soil and sand, which are used mainly by the amateur clubs.

• Hybrid surfaces: over the last 15 years all the top-level football grounds have been laid withhybrid turf. In this case, a substrate replaces the sandy layer. A mixture of soil and organic compost allows the turf to expand. These soils surfaces are then reinforced with synthetic fibres applied either horizontally or vertically.

A hybrid stadium considerably increases the speed of the game, improving the passing of the ball and the comfort of the playing surface, as well as making the pitch usable in all weathers. The drainage isimmediate, and the water is absorbed rapidly. Therefore, the ground is never flooded as couldbe the case with natural grass.

The Rodez club has opted for a hybrid turf made by Natural Grass: which uses the Airfibr process with a natural drainage system. According to Marc Rouquié: “As the club has just been promoted to League Two (Ligue 2), we have chosen a hybrid turf withsynthetic fibres; furthermore, of the two techniques we have chosen the horizontal methodbecause, as far as the maintenance isconcerned, it more closely matches that of the traditional pitches. Therefore, wedid not need to retrain the people in charge of pitch maintenance.”

The new irrigation system consists of 40 sprinklers laid out evenly over the whole pitch: we have 8 rows of 5 sprinklers, with one sprinkler every 15 metres, and 14 solenoid valves on a pitch measuring 126 x 80 m.

“These triple-spray nozzles allow us to achieve good uniformity of distribution over the whole surface area, including around the foot of the sprinkler”, explained Mr. Rouquié. The arcs on these sprinklers can be set at a full circle, half-circle or 90°, as required.

The pitch also has 18 sprinklers in the middle (6 rows of 3) of the Hunter I-40 type, this model being widely used on sports fields. These are small sprinklers with a small radius, sunk into the ground.

They have a radius of throw of up to 23.2 metres and a total height of 20 cm (pop-up height of 10 cm). Furthermore, they are equipped with a few options, with nozzles of threes treams and a back stream allowing for optimal distribution of the irrigation water. Their flow rate is around 15 mm/h: “they allow us to irrigate quickly just before the match and at half time, so as to wet the playing surface”, explained Mr. Rouquié.

Thus, we have a considerable number of sprinklers, these being more and more efficient individually in terms of uniformity of distribution. The more sprinklers there are, the more water will be saved because no part of the pitch will be overwatered,

Irrigation can beactivated by remote control. According to the city’s sports director “We haven’t bothered about any special training as only a few explanations are required as the controller and remote control are extremelyeasy to use. Some general settings were inputted when the system was installed to reflect the requirements of the turf. Moreover, each sprinkler is numbered sequentially sothey can be configured individually according to the water requirements of the sports field.”

Each sprinkler can be operated individually, except for those in the centre of the pitch, which operate in threes. Mr. Rouguié explained to us: “there is less need to have sprinklers in the middle of the field that operate individually and this has allowed us to make some savings”. In total, the investment for irrigation for the city was around €90,000 exclusive of tax.

The whole set-up will soon be linked to a weather station and moisture sensors, which will provide the system with additional information about the atmosphere, moisture, rainfall and soil, allowing the irrigation scheduling to be adjusted on the basis of all this data and apply the precise amount of water to the plant in accordance with its needs. The meteorological station and sensors will be incorporated into the new stand (the current stand isgoing to bepulled down and replaced in May 2021).

The football ground was completed in October 2019. Mr. Rouquié has had a little over a year to reflect on his new installation and heappears to be quite satisfied: “the amounts of water applied are very precise, taking into account the places in the shade, the water shortage of the turf grass… all under the daily control of an officer from the municipality.” And he adds: “with this hybrid pitch, the water is applied more frequently but in smaller amounts. At the end of the day, we are using a lot less water. Consumption has dropped to 3000 m3 from the 5000 m3 used previously thanks to both the new substrate and the new irrigation system.”

And he adds: “And once the weather station and the sensors are installed, irrigation shouldbeeven more precise with even more significant savings on water.” 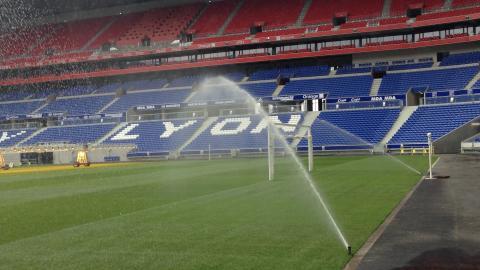 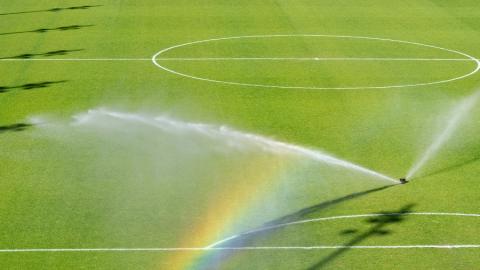 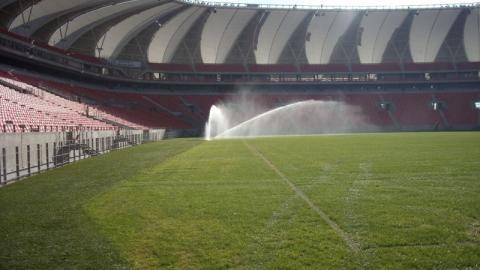