Drip irrigation of maize (corn) in France and Italy

Grown for the high starch content of its grains or its qualities as a fodder crop, the production of maize is widespread on our continent, where farmers have adapted their practices to respond to the needs of this tropical cereal crop. Often criticised because its excessive thirst for water is incompatible with our summer climates, maize production often requires regular irrigation to make it profitable. 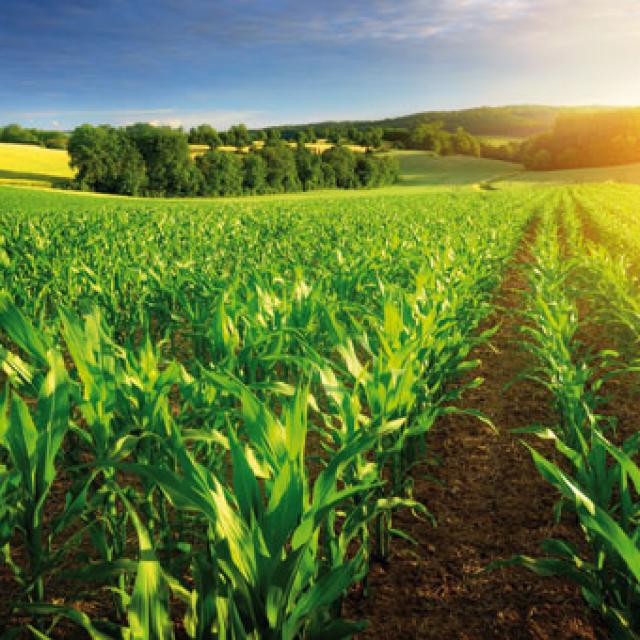 In France, maize (or corn) is the crop that consumes most water for irrigation in terms of surface area.

However, from an agronomic point of view, this plant is very efficient in its use if water, i.e. the ratio of dry matter produced or crop yield to water absorbed is very high. The reason for this is that maize has a metabolism known as C4: it is capable of carrying out its photosynthetic activity, even when exposed to intense heat, because the carbon-fixation process continues in another compartment of the leaf, even when the stomata are closed. Therefore, in theory, under conditions of high temperatures, such as those encountered in the summer, the maize is one of the plants that requires less water! However, for pro­duction to be viable in Europe, additional applica­tions of water are often imperative.

Evapotranspiration is at its maximum in the summer. The principle of rational irrigation is based on the avai­la­bility to the plant, in real time, of a quantity of water equal to that lost through evapotranspiration. This level of consumption is measured according to the cli­ma­tic conditions and a crop coefficient Kc that varies from 0.3 and 1.2, depending on the phenological develop­ment stage of the maize crop. The farmer should be par­ticularly vigilant during the flower or cob deve­lop­ment stage and the pollination or silking stage that follows.

Plant water stress during this period could severely affect yield. An understanding of these needs forms the basis of irrigation management: for an evapo­transpiration rate of 6 mm per day during periods of peak consumption, in a soil with a sandy loam tex­ture, it is vital to apply 18-20 mm of irrigation

water every 3 days. Not only the quantity but also the frequency and the duration are, therefore, im­portant when attempting to obtain even growth. Besides, the relationship between the rooting system, soil and water is an important control factor for the efficient management of the crop. In fact, the balance between oxygen, water and soil particles will allow the roots to absorb the available soil water and nutrients contained therein.

The drip solutions for the maize crop

Two groups of products have been approved for the maize crop in France and Italy over the last 7 years, by comparing them with sprinkler systems, hose reels and pivots: above-ground drip irrigation and subsurface drip irrigation. The yield, quality, uniformity or even ease of management have been evaluated to develop complete and adaptable solutions, which can be supplemented by an injection system for fertigation.

This method is widely used in Italy, particularly in the Po Valley, Emilia Romagna region or the south of the country. It has been steadily developed in France on land farmed by enthusiasts. This solu­tion consists of laying out a flexible tubing contai­ning Streamline Plus type turbulent-flow drippers, at the beginning of the season, between the rows of maize, in every alternate row, i.e. 1.40 m to 1.60 m apart, according to the seeding pattern. The drippers are spaced 40 to 50 cm apart, according to the soil type, to create a conti­nuously wet strip of soil. Most of the installations in Europe nowa­days have drippers with a flow rate of 1 l/h, which allows for optimal water distribution in the soil. At the end of the year, normally the drip irrigation equipment must be collected up for incorporation into the recycling system. The proposed system is complete and has been designed to make installa­tion as simple as possible: the submain is an innovative flexible tube, patented under the name of FlexNet with pre-fabricated welded outlets for conducting the water into the dripper line via secu­re and quick-fit connections. It is then rolled back up at the end of the season for use the following year. To speed up the operation and save on a few hours of labour, it is possible to use the QFlex risers for connecting to the outlet take-off when unwinding.

The Subsurface Drip Irrigation technique, even though it has been practised for many decades on tree crops, it is still considered to be one of the more innovative and state of the art kinds of irrigation techniques. Of course, it is restricted to those producers who have chosen to till the soil only to a shallow depth. It has been adopted for some time by maize producers on the American continent, and the technique has steadily grown in popularity since 2010. The drip irrigation system used has a superior technology: it is self-regulating and anti-siphon, of the DRIPCORN type. The pipe itself is designed to withstand several years underground, providing that the network receives minimal but regular maintenance. Its installation and implementation require the support of experts because several parameters have to be determined in the early stages: a suitable installation depth - which is set according to the type of tillage and soil preparation, soil texture, crops included in the rotation, etc. - and good water application mana­gement, which are dependent on the scheduling tools that are essential for visualising the soil moisture content in the rooting zone and allowing the grower to decide how to divide up the irri­gations as the season progresses. The initial investment, which is quite significant, must also be considered and its return calculated over the long term. However, the subsequent agronomic and practical benefits are numerous: efficiency, well-hidden equipment, less weeds, time-saving, use of sustainable resources.

How to select a system?

The needs of the producer

Firstly, the objectives that the farmer aims to achieve by using the micro-irrigation systems and his priori­ties will determine the nature of the potential solution:

• Possibility of applying nutrients by fertigation

• Reduction in inputs (fertilisers in units/ha and phytosanitary treatments)

• Time-saving because of the automation of the system

In Italy, drip irrigation, mainly of the above-ground type, has primarily been adopted by the sectors produ­cing maize for fodder and biogas. In fact, these types of maize production require a constant and high quality compared with standard grain maize produc­tion, where the market is more erratic and producers tend to shy away from investing in costly systems. In France, sub­sur­face drip irrigation and fertigation are used to enhance fodder maize production, allowing the farmers to concentrate on caring for the cattle while still ensuring that there is sufficient food for the animals with the right nutritional quality, resulting in enormous financial savings. The specialised production sectors, such as the seed corn or popcorn sectors, are installing above-ground drip irrigation systems on more and more hectares to replace hose reels with precision irrigation, with the high investment cost being the only obstacle to the widespread adoption of this technique.

Constraints for the producer

First and foremost, it is recommended that specialised technicians should be employed for the setting up of whatever kind of drip irrigation system, to ensure that all the elements are in place for the system to operate correctly in the long term: network dimensions, fil­tration quality, dripper performance, machine for laying and picking up the tubing and the installation of a control system.

Furthermore, each farm must confront its own specific problems. The irrigation system to be implemented must, therefore, allow the farmer to respond in the best possible way. These problems are quite diverse. In France, more and more producers are seeking to install a system that is hidden from view, even invisible, thus being protected against theft and vandalism or out of reach of the prying

and often critical eye of the neighbours and authorities. The scarceness of the resource and the preservation of ground water is also a sensitive issue at the heart of these concerns. The agronomic contribution towards gains in yield, quality and uniformity has been consistently observed on unconventional or challenging plots of land.

If the choice of a subsurface system is always enticing because technically it is the most efficient, it should not, however, be installed without some preliminary checks being made. The basic questions to be asked before setting up such a system are as follows:

The Italian exception: the LPS system

The LPS system, which stands for Low Pressure System, is a solution that uses a principle similar to that of conventional drip irrigation except that it has been designed to irrigate large surface areas without any part of the system being pressurised! With only 1 or 2 bar of pressure permitted by the setting up of a relatively high head and large diameter primary pipes with very low head losses conveying large volumes of flow, the LPS system allows for more than 30 ha to be irrigated in one irrigation, even more if the land is flat.

The drippers used for this solution have a very low flow rate of 0.6 l/h. The quality of the filtration upstream is, therefore, essential for a sustainable system. The Italian system has now been in existence for more than 10 years and the producer has been perfectly satisfied with its results during this period. Drawing on the experience acquired in surface drip irrigation and scheduling, the farmer is now considering the possibility of using the subsurface option for large fields of maize irrigated by drip irrigation. Surface irrigation will, therefore, have been, as is so often the case, an initial practice, which would give way to subsurface irrigation, this being more technically demanding but, nevertheless, capable of achieving a higher level of efficiency.