Special Report:Production of flowers in greenhouses in Holland

On a rainy June morning, accompanied by Arjan Van den Berg, head of sales at NaandanJain for northern Europe, we travelled to meet the flower producers in the Westland region, in the south-west of Holland. 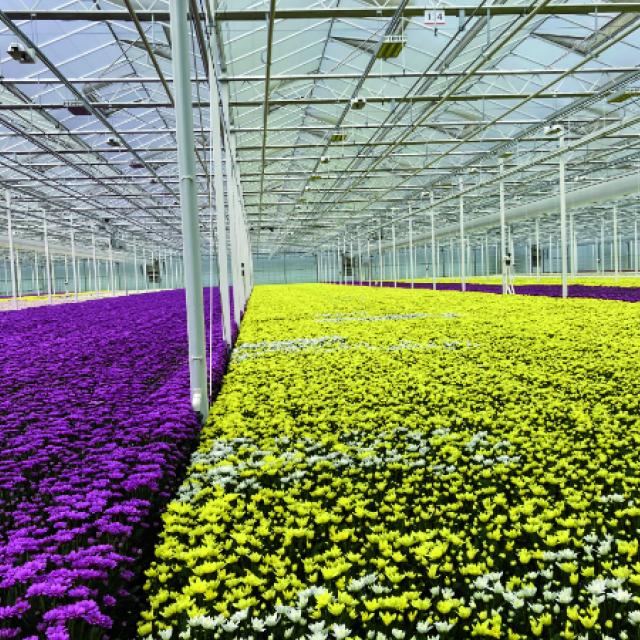 We passed through a residential district, with greenhouses and dwellings with well-kept gardens scattered and we then arrived at the premises of U Grand, who are producers of chrysanthemums using state-of-the-art technology.

When we entered the greenhouse, I was overwhelmed by the humid and stifling atmosphere, and thoroughly impressed by the vast array of colourful flowers that extended as far as the eye can see. Rose-coloured, yellow and white chrysanthemums follow one after the other in this vast greenhouse that covers some 10 hectares.

The 4 pillars of the flower’s development: Heat, light, irrigation and CO2.

“We can expect an optimum level of growth when these four components are optimised”, explained Arjan.

And he added “the large white tubes above are used to moisten the air so that an optimum humidity level can be maintained in the greenhouse”. And there is also a system in place for heating the soil, using hot water circulation pipes. “The ideal temperature for the best growth of the flowers is between 18° and 21°”, continued Arjan.

We noticed two types of lamps on the ceiling: LED lamps which, according to Arjan “are energy-saving” and Son-T type lamps “which generate light as well as the heat”.

The flowers are irrigated with micro-sprinkler system

The flowers are irrigated with rainwater. The gutters installed on the roof of the greenhouse enable the recovery of this water. It is directed towards an outside reservoir where the water is stored and then injected into the irrigation system.

The flowers are irrigated with NaandanJain’s Green Spin micro-sprinkler system, consisting of two rows of micro-sprinklers spaced 1.25 metres apart. The irrigation system is positioned at three metres above the flowers.

The system operates in a closed loop: the water that is used to irrigate the flowers is recovered, treated and reinjected back into the irrigation system. The whole unit is irrigated almost exclusively with rainwater, except when it is extremely dry.

The cutting of the flowers is also automated. A machine allows the flowers to be cut when they reach maturity. If the four prerequisites are maintained at an optimum level, all the flowers will be of the same height. The consistency of the flower production is impressive. Three people pick the flowers and then the following day, planting starts again with another machine.

Eight weeks elapse from the moment the flowers are planted to the time when they reach maturity. And in the greenhouse, there are flowers at all stages of growth. Some have just been planted, others are half developed and finally some have reached maturity. Thus, our producer can sell his flowers every day of the year. The flowers are chosen according to the events: 8 weeks before Valentine’s Day, for example, red flowers are planted and 8 weeks before Mother’s Day, they will be white.

The flowers are presented in two ways: i.e., in the form of bouquets for direct sale, or in bunches on the trollies for sale at the auctions.

We then proceeded to visit another producer, Mr. André Reijm, of lilies this time, the company being called Double Check Lily. Mr. Reijm has 12 hectares of lilies, including 4 here. 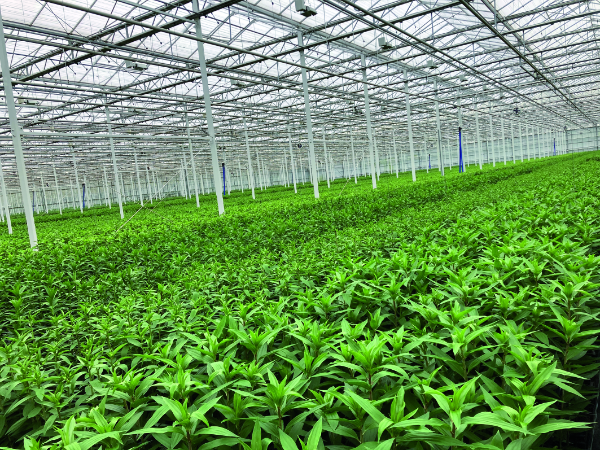 Lily production is similar to that of chrysanthemums with a few minor differences, however:

• The lilies are planted in pots and not in the ground, allowing for greater control.

• As far as the lighting is concerned, the lilies’ requirements are less than those of the chrysanthemums and the greenhouse is only equipped with Son-T type lamps to supply heating.

• The growing cycle for the lilies is 12 weeks and just like the chrysanthemums they are cut and replanted, but this time we are dealing with bulbs and the quality of the soil is especially important.

• The lilies are picked in 4 stages so that the flowers are all of the same uniformity.

Mr. Reijm produces 20 million lilies per annum. At the present time, with the war in the Ukraine, he is suffering from the hike in energy prices, which represent 30% of all his costs.

The lilies are sold at auctions.

Most of the flowers produced in Holland are sold via Flora Holland, a Dutch cooperative of flower producers, which has the largest auction house in the world. The company is set up in six sites: Aalsmeer, Naaldwijk, Rijnsburg, Venlo, Bleiswijk and Eelde.

We travelled to the Aalsmer site at 6 o’clock in the morning. We were welcomed by Ari Bezemer, the manager. The auction was established 120 years ago because at that time the flower producers were looking for distribution channels to sell their flowers. It is a cooperative, which means that it is owned by the growers. To be able to sell their product in the auctions, they must be members of the cooperative. Nowadays, the flowers don’t just come from Holland, they also arrive from Israel, Ethiopia and Kenya.

We then went to the auction room where we could see the progress of the sales on auction clocks. Ari explained to us: “The clients come from all over the world. There are 6,000 of them and they are basically wholesalers or retail chains.” And he added: “very few of the clients are actually present. Most of them buy their merchandise on a computer at their own premises.”

Each sale is completed very rapidly on the clock. All sorts of flowers are sold: lilies, roses, chrysanthemums, gerberas… If the flowers don’t have any takers, they are thrown away. The auction system sets a reserve price for the day. The producers are paid weekly and put their flowers up for sale every day.

We then moved on to the warehouse where the flowers are stored. It was very cold, and we could see lots of trolleys loaded with flowers. Ari explained: “Depending on the type of flower the cold rooms are kept at 8° or 2°, The lilies, which are less hardy, must be kept at 2°.”

Nowadays, not all the merchandise physically passes through the Flora Holland sites. Some sales are made by using photos alone.

15 million flowers are sold each day by Flora Holland. The main countries of destination are the United States, Europe and the Gulf states; Russia also used to be a major client, but all sales have been halted on account of the war. 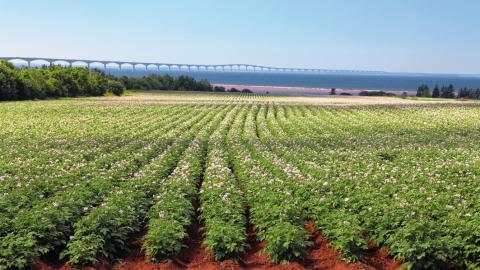