Choice of a 2-wire system for large green areas and Golf Courses:DC pulse or 24-volt AC

This is one of the questions that are almost existential: The Sea or the Mountains, Tea or Coffee, Diesel or Electric. So, in irrigation as well, when considering how to go about renovating the irrigation system, there is a risk of asking the question: should I use pulse DC or 24-volt AC for my 2-wire system? 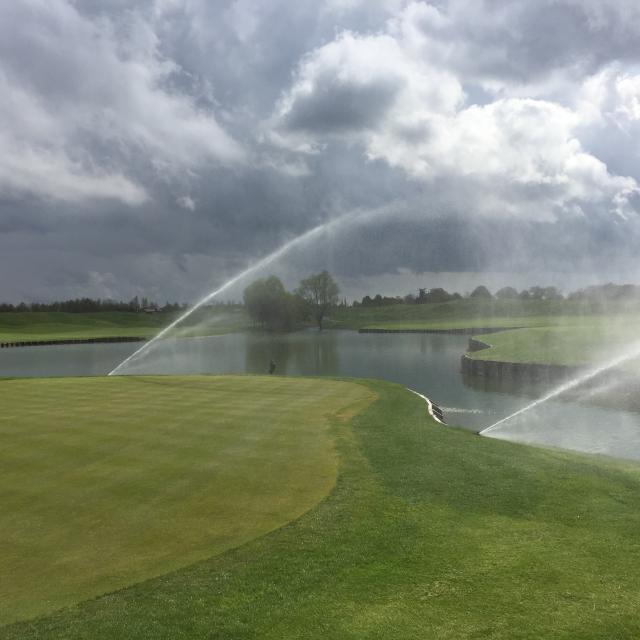 A little bit of history

The first 24v AC decoders appeared on the market in the 80s but in particular it was in the 90s, when Rain Bird introduced for the very first time (the manufacturer is Danish, editor’s note), the FD Field Decoder, that this system really took off, thus relegating to the past all the systems that were being installed on golf courses at that time, i.e. electromechanical systems. The decoder had many advantages: simple 2-way communication cable, quick and easy to install, reliable. It became so successful that very many of the European golf courses, even today, are equipped with them.

A new technology appeared in the 2000s, based on a 9-volt DC pulse system. Toro was first to install the GDC decoder, followed by Rain Bird in the 2010s with the IC system. In 2020, Toro introduced the successor to the GDC, i.e., the LSM. Their specific features are being a system that operates with 9-volt pulse solenoids with the correct polarity. A pulse is sent to the solenoid to activate it and another to deactivate it. The advantages of this system are longer signal cable lengths and less electricity consumption because there is no current held between the two pulses. After a difficult beginning, for both brands, this system gives full satisfaction at the present time.

The system operates with a 9-12-volt DC pulse solenoid. When at rest, the plunger, or core, in the solenoid is at the lower position, blocking the outflow from the bottom valve and shutting off the irrigation. When the decoder recognises its code, which is unique for the entire system, a pulse is sent to the solenoid via the capacitator. This creates a magnetic field which lifts the plunger, thus opening the orifice and allowing for irrigation to continue. This is then maintained in an upper position by a magnet. By reversing the polarity of the magnetic field, the core falls back down. Between the two pulses, there is no voltage in the wires. The wires in these solenoids are always of distinct colours in order to ensure the correct matching polarity. 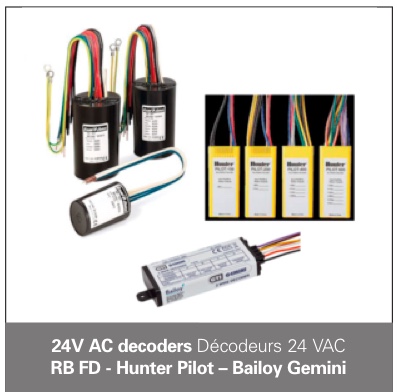 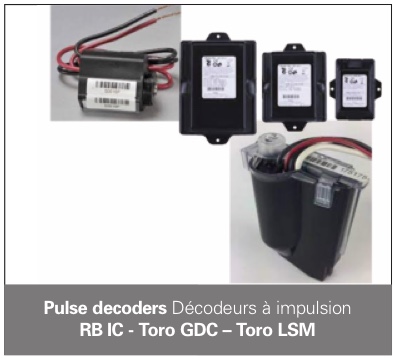 As already mentioned above, the advantage of the pulse (system) lies in the possibility of having longer lengths of signalling cables (up to 4500 metres) and less energy consumption (0.3 mA (ICM) and 0.2 mA (LSM) compared with 0.5 to 1 mA for the 24-volt decoder).

This system operates on the principle of a surge or peak current being applied to lift the plunger and a retaining current to hold the plunger in the top position. When the central control unit sends a code for the decoder to be activated, a capacitator discharges to send the surge current to the solenoid. A magnetic field is created, “drawing” the plunger or core to the top, thus releasing the flow of water and allowing the valve to open. For the valve to remain open, there must always be a voltage (holding current) between the decoder and the solenoid for the whole of the irrigation run time to maintain the core in the upper position. This system has no polarity and the wires of the solenoid are of the same colour.  In the event of there being any problem, the holding current is interrupted and the plunger falls, with the help of a small spring, thus shutting of the sprinkler or the valve. 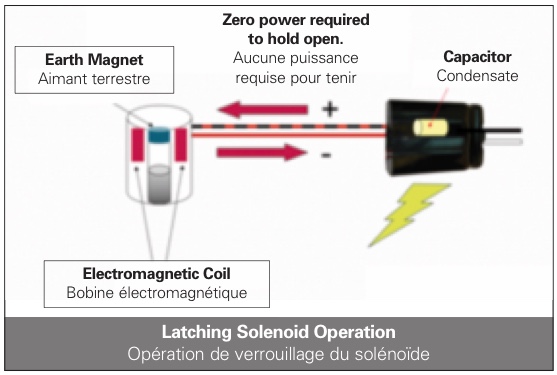 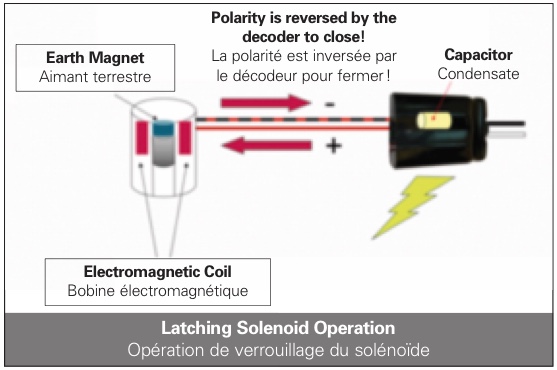 This principle has existed for very many years, providing proof of its efficiency and reliability.

For the irrigation professionals, intervening in a 2-wire system is not in itself overly complicated, rather it requires patience, diligence and time. A defective decoder or a surge protection accidentally triggered could lead to a security lockout of the system, thus closing down all irrigation. In this case, a fault-finding operation must be conducted in the field with the appropriate tools (RMS multimeters, clamp ammeter). And as many sites do not have, or have very sketchily, wiring layout plans, it is necessary to proceed by trial and error to find the defective decoder and that could take a long time.

All programming software programmes have a function that allows the user to conduct a pre-diagnosis, beginning with the decoder communication. The more complete and precise the diagnosis, the “easier” will be the fault-finding.

Nowadays most of the upgrades are carried out by using the pulse systems because, apart from the benefits described above, they offer the most sophisticated diagnostics tools, thus facilitating fault-finding in the field.

The inference might, therefore, be drawn that the 24-volt decoder, after a few successful years, has won the day.

However, this does not consider the new products that that have just come on to the market and which has really reshuffled the cards.

In fact, Toro has just launched a new 24-volt AC decoder, which has a number of advantages: the Toro LAC. 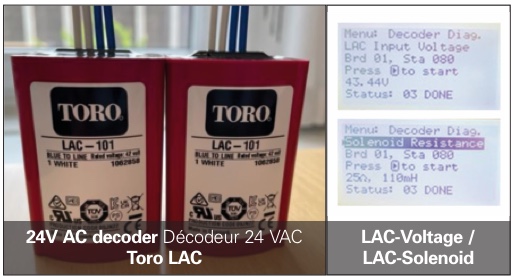 With the first generation 24-volt AC decoders, the only diagnosis available was the communication test, allowing the user to know whether the decoder recognises its address online. The problem is that this test also activates the solenoid briefly, triggering the sprinklers to start, which would be quite annoying for any players still on the golf course.

The new Toro LAC 24 v AC decoder allows for a number of tests to be carried out: communication (without activating the solenoid), voltage at the decoder’s intake, solenoid test, coil resistance measurement, earthing problems with the electrical connections. All these tests allow the user to narrow down the fault-finding operation in the field.

So, which one do we choose, DC or 24 v AC? It is difficult to say yes or no to any of the technical solutions on offer, each one having its pros and cons.  It is important to ensure that your project is well-defined: partial or complete renovation, number of phases, compatibility of the different systems, feedback, before selecting one solution or the other.

A consulting agency, specialising in the irrigation of large spaces and golf courses, could help you in your deliberations and choice by offering their experience gained in the field and it is recommended that you to obtain the support of these consultants for any of the projects.

In the same way, the installation of such systems should be entrusted to professional firms who have the necessary experience and qualifications (Qualipaysage, a proficiency qualification in automatic Irrigation, formerly known as A520-GC). In fact, whatever the system used, the installation must be of the highest quality, beginning with the care taken over the electrical connections, the principal source of problems in the field.