Developing nature in the city; this is the ambitious target set by the City Council of Fréjus for the next 5 years: “5000 trees was his election promise”. Improving the quality of life, reducing urban pollution and combatting climate change are some of the many advantages of growing plants in the city. 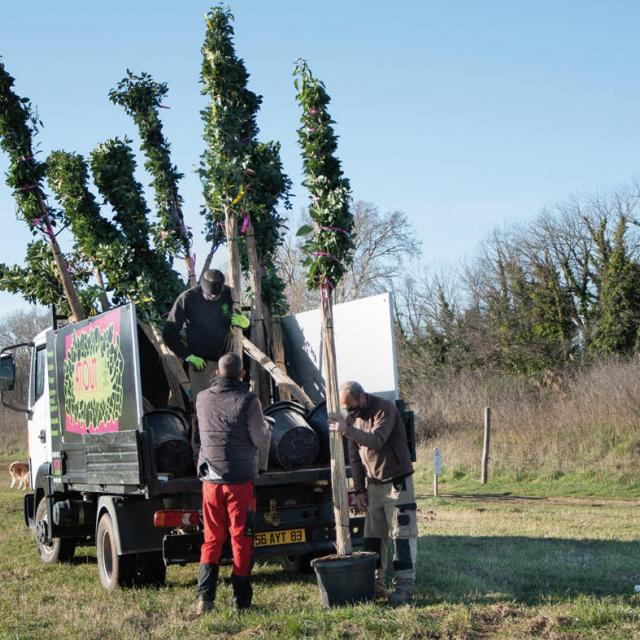 This large-scale project, which began in 2021, is expected to last 5 years. It started out on the Nature Base, a bastion of greenery on the banks of the Mediterranean in the town of Fréjus. This vast natural area of more than 135 hectares beckons us to relax and breathe in the fresh air with wisps of sea spray. Situated on the coast and covering 85 ha of protected natural green spaces, the Nature Base offers a wide range of exploratory activities. You can bathe in the water and have unforgettable experiences, set off on a cruise or wander through the lush green pastures. Apart from the landscapes, the Nature Base also has around fifty hectares of playing fields and an open bathing area. Bicycles can be hired on site.

Up to now, these spaces have basically consisted of lawns and there were very few trees.  There was just an avenue of plane trees and a few rare pine groves. With little shade, it was so hot that it was difficult to go for a walk or jog. That is why the mayor of Fréjus decided to plant five hundred trees on the base. The project was followed up at regional level and Id Verde was chosen to carry out the installation of the irrigation system.

The project began on 25th January 2021. The 530 young trees from the nursery are planted. Among the sixteen species selected we find lime trees, camphor trees, wild pepper trees, hackberries and Judas trees, to name but a few. Chosen for their looks and scent, the trees are formed into copses or thickets, each having one single plant species. The space has been modified and the copses have been positioned in the landscape depending on the major events that take place there. In fact, the great plain, which is exceedingly popular in the summer, hosts concerts, cycle races and many other festive events.

The work began on the northern section of the Nature Base. The pedestrian entrance, at the junction of the rue des Batteries and the avenue Eugène Joly, has been enhanced by a pleasant reception area, spread over more than 2500 m2, with the introduction of street furniture and companion planting. They then moved on to the great plain.

The sprinkler installation: bubblers for watering the trees

Irrigation is essential for newly planted trees, at least during the first two years, to allow the rooting system to develop. Irrigation is then halted but the system remains in place as a precautionary measure. In this very sunny and wind-swept zone there is a risk of drought and the irrigation system is there just in case. This will prevent the trees from dying during the heat waves, which unfortunately we are experiencing more and more. Only the trees are irrigated on the Nature Base but that is not the case with the turf or lawns.

The aim of the sprinkler system, consisting of bubblers, is to distribute the water so as to irrigate as far as possible into the inside of the copse with a 63-diameter unit.

The installation consists of nine hundred Rain Bird RWS bubbler devices, which surround the tree’s root ball, with a surface-accessible vertical watering tube (RWS unit). Each tree has two bubbler devices, one small- and one medium-sized, so that water is immediately available above and below the root ball. For each tree, one bubbler is placed near the centre of the root ball and one below the root ball. Underground aeration and irrigation prevent trees and shrubs from having to suffer the shock of transplanting, guaranteeing the vigour of the trees and encouraging faster growth.

However, some fifty or so trees are not irrigated with the bubblers but with simple underground water supply pipes because on one part of the Nature Base the soil is sandy. The RWS columns have a small groove in the middle section which fills with water. In sandy soils, the sand manages to pass through the grid and clogs everything. That is why, on this type of soil, simple underground water supply pipes are used, which are manually-installed perforated pipes placed around the tree together with the RWS unit. Irrigation management is achieved with a controller. There is a controller in each valve box. The installation has twelve solenoid valves in total and each sector has 70 bubblers (i.e. 900 in total).

The site managers decided not to instal sensors because the soil differs so much from one part of the base to the other. They irrigate by eye, more often and for longer on the better draining soils and for less time on the clayey soils, which retain more water.

The base is irrigated with water from the city mains (municipal supply). There are no boreholes or reservoirs (or holding tanks or ponds). The system was designed in a way that will allow for a central control unit to be added. The possibility of centralising the system is being studied.

This first part of the project was completed on 15th March, but it is far from finished. Other trees have to be planted on the base. The exercise course, which is 2,300 metres long, will soon be surrounded by cool areas, a number of trees being planted in a circular manner around the obstacles, thus providing shade.

Finally, the existing pine forest, already expanded by the addition of the “children’s forest” in 2021, near the sports complexes and playing fields, is due to be enlarged. Young trees will be planted to offer a place of relaxation in the shade of the pines.

€76,200 for purchasing the trees (subsidised by the regional council) 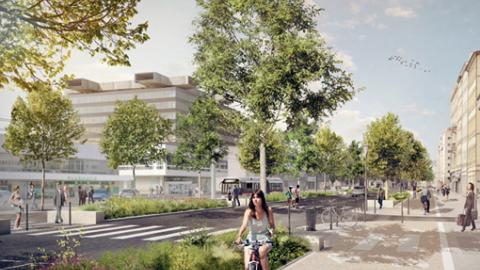 Ecosystem services provided by trees in the city: Assessing the cooling capacity by measuring the dendrometric parameters (trunk diameter growth) 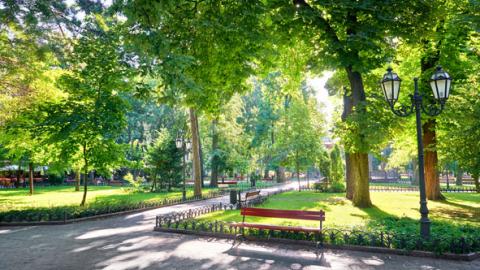 The true effet of irrigation on trees