The Precision Corner with GPS Guidance: installed on a farm in the Landes region of France

A GPS-guided Valley® Precision Corner has just been installed on a farm in the Landes region of France. This exceptional machine is the first of its kind to be installed in the South-west of France and only the second in the country as a whole. The Carcan farm, where this machine is operating, covers an area of 840 hectares, with mainly maize being grown  (700 hectares) on the farm, with a small area (60 hectares) put doen to carrots. The whole farm is irrigated by 23 pivots, 3 linear move machines and a precision corner device. 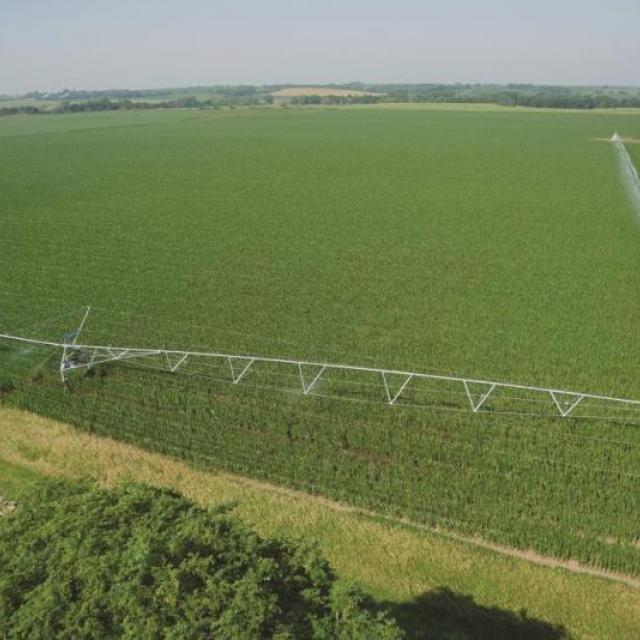 In the Landes region, on a fine December day, accompanied by Armel Morlet from the company Valley, we drove down a long straight road bordered by pine trees and headed for Carcans. When we were a few kilometres from the sea, we turned off to the right in the direction of the farm. We then met Mr. Thierry Gorchon-Ricart, the farm’s head of irrigation and Mr. Bourgoint, a young technician from the company Valley. We all then went down to the field where the GPS-guided precision corner device is installed.

Why was a GPS-guided Polyspan® precision corner chosen?

This peculiarly shaped field (poin­ted or tapering) cannot be irrigated with a pivot or linear move. In fact, the pivot irrigates in a circle and the linear move irrigates a square or rectangle, which would leave a large part of the field without irrigation.

This field was already equipped with a corner machine, but without GPS guidance and it had a traditional liner inside the span pipe. The machine deteriorated over the years. In fact, the corrosive water of the Landes region, which has a high iron content, accelerated the ageing of the spans. The useful life of a pivot exposed to ferruginous water is 7 or 8 years.

Further­more, being a corner device, the machine had a lot of problems with traction and compression stresses. Thierry didn’t want to take the risk of keeping this machine for one more year: “if it were to break down in the height of the season then we would have to pay a heavy price and we would put a part of the maize harvest at risk”.

The owners of the farm have, therefore, decided to invest in a Polyspan® lined GPS-guided Valley precision corner device. This was a major investment, but one that was worthwhile because this new machine is perfectly adapted to this irregularly-shaped field and the farm’s very ferruginous water. Furthermore, the GGS Valley® technology is compatible with other makes of GPS-RTK products, such as John Deere®, which has enabled our farmer to rely on his tractors’ RTK system.

The farmer has also chosen a corner machine with the sprinklers mounted on drop pipes so that the ferruginous water will not wet the spans, thus protecting them from outside corrosion.

This type of sprinkler (facing down­wards) also has the advantage of reducing evaporation and, therefore, it makes significant savings on water use. The only disadvantage of the “goosenecks” is as follows: when the maize crop is high, it is difficult to see whether or not the sprinklers are blocked; so this solution can compro­mise the monitoring of the pivots during the irrigation season.

GPS-guidance of the corner machine. The precision corner device allows the last span to be extended or folded back so it can follow the shape of the field. Two variators, one at each end of the field, coordinate the smooth running of the two towers. “If there is an obstacle, for example a forest, as is the case here, the last tower will draw back. Folded back completely, the corner forms a 90° angle. On the other hand, when it is fully extended, its maximum angle of deployment is 170°”, explained Arnel Morlet.

The GPS operating principle (or the GPS guidance system) is based on the use of a GPS antenna positioned on the tower controlling the corner span, instead of using the traditional buried guidance antennas; this GPS antenna communicates with an array of satellites that determine the machine’s position; this precise interpretation of the position data is refined and cor­rected through the employ­ment of RTK technology: a radio also situated in the corner span tower is in commu­nication with the radio of an RTK reference station situated at a promi­nent fixed point. The RTK station thus provides the necessary degree of accuracy required for the precise guidance of a corner.

“Prior to setting the machine in motion, we then input data relating to special points of the field (corners, angles, obstacles) in order to create a trajectory for the corner via a dedicated programme”, continued Arnel Morlet. “This pro­gram­me is then loaded onto the GPS computer situated in the last tower; the com­puter continuously interprets and adjusts the movements of the machine with the use of a trajectory program­me and information received from the satellites and the RTK base station.”

Furthermore, the Corner arm, accor­ding to whether it is extended or folded back, will not be irrigating the same surface area. The pivot-corner auto­matically manages the amount of water applied by the corner arm as it folds back or extends outwards, while the pivot continues to rotate: the water application, as far as uniformity is concerned (conditioned by the nozzle plan), takes account of the angle of the corner arm compared with the rest of the machine, through the use of hydrovalves that automatically control the opening/closing of the sprinklers positioned on the corner span.

It should be mentioned that GPS gui­dance is only available for the corners and linear moves. In fact, a pivot does not need to be guided because it rotates in a circle.

On this plot, carrots and maize are planted alternatively; at present the field is down to maize and in five years it will be put back to carrots. We visited the farm in December; at that time the field was covered with a layer of very short grass. Mr. Thierry Gorchon-Ricart explai­ned to us that “they allowed the greenery to grow because the instructions of the CAP have changed and we are no longer allowed to destroy the cover crops until February”.

Stubble ploughing. In February it is envisaged that the land will be tilled with a stubble plough, a machine equipped with teeth or discs, allowing the foliage to be ploughed back into the soil.

Tillage and sowing or seeding. “April is the time to work the land and we start sowing during the first window of fine weather (60 hectares are sown each day)”. A localised placement of fertiliser is applied with the maize seeds.

Nitrogen application. Nitrogen must be applied opportunely in order to adhere as closely as possible to the crop requirements during its growing season. The nitrogen requi­rements of the maize crop peak after the 10-leaf stage. In order to ensure that this period is well covered, most of the nitrogen should be applied between the 4- and 10-leaf stages, the ideal solution being to apply the element around the 6- to 8-leaf stages.

Insecticide application. “Over the last three years we have been forced to apply an insecticide application in the month of June because we have had a corn borer problem on the farm” explained Mr. Gorchon-Ricart. The corn borer is an insect that eats into the maize stems, leading to a generalised weakening of the plant. In the case of severe attacks, the plant can break down and the cobs fall off before harvest. The systematic crushing of the maize stubble after the harvest will stop the proliferation of the pest.

Irrigation season. The season be­gins in June-July, depending on the weather. Last year it began a little earlier, at the beginning of June because the weather was fine. “You have to react quickly because, when the maize plant is young, the leaf can tend to curl very quickly”, Thierry explained to us. The farm is equipped with tensio­meters, which allow the farmer to pre­dict the plant water requirements.

There are 6 boreholes on this plot, i.e. 170 m3 for 78 hectares. The boreholes are sunk into the water table at a depth of 18 to 25 metres. Since the storm of 1999, the ground water level has not fallen so much because there are less pine trees (the pines consume enormous amounts of water). There is, therefore, no need to sink the boreholes to a great depth.

The GPS-guided precision corner is a machine that is specially adapted for certain specifically-shaped fields. GPS-guidance is surely going to be developed over the coming years because it allows for exactly the required amount of water to be applied to the field as a whole, no matter what its shape. 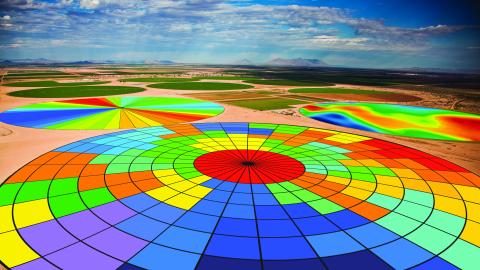 Pivots - Variable Application of Irrigation Water. Looking at VRI systems in the USA 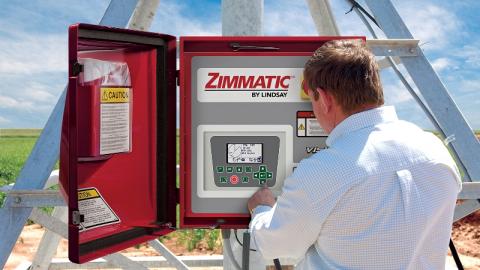 Repair and Maintenance of Centre Pivots