Agriculture has become a priority for Senegal

Soil depletion and several decades of neglect on the part of governments and international organisations are factors that have increased the poverty levels of African farmers. Far from achieving food self-sufficiency, Africa is still heavily dependent on exports. The 2008 global food crisis, marked by a sharp rise in the prices of food commodities, has dramatically affected the countries of Africa. Agriculture has, therefore, become a priority for the continent. Just like Asia in the 70s and 80s, Africa should embark upon its own green revolution to improve food security and sustain its economic growth, which is why the Biosoy project has been launched. 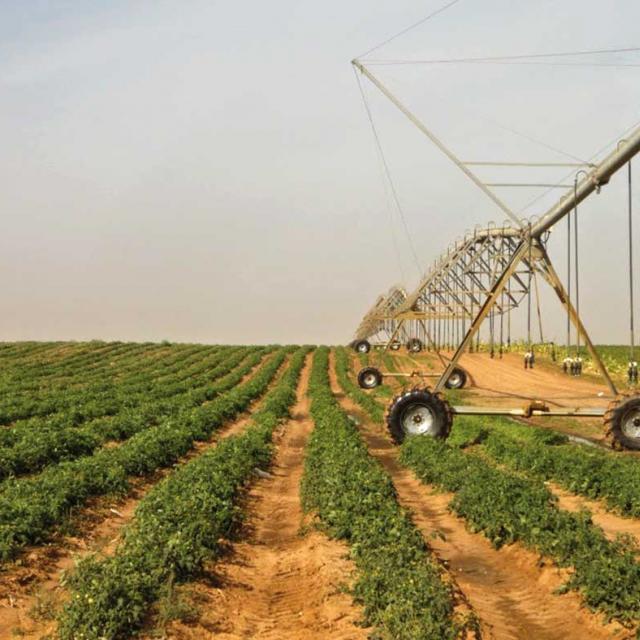 Diélaly. This place doesn’t mean much to many Senegalese. Getting to this town nestled in the heart of the Walo region is not an easy task. Situated near Keur Momar Sarr, you have to drive along a sandy track to reach the village, located to the south of Lake Guiers, in the rural community of Syer.  Once you reach Diélaly, you must then travel another 25 kilometres to reach the fields of the Biosoy project area.

It was a long and difficult trip with no lack of complaints. Once we arrived on site we could see that the project was already beginning to take shape. The 1000-hectare site, which, in the recent past, was dense forest, has been converted into an agricultural project. The tillage phase has been completed. The pivot  moves at normal speed, powered by the spinner drive mechanism. It irrigates 50 hectares outofthe300alreadycultivated aspartofthefirstphaseoftheproject.

Theprojectconsistsofthecultivationof 1,000 hectares of farmland for the production of organic crops intended for export and certified groundnut seeds for use by Senegalese farmers. The project will, in the first instance, directly help to create 200 jobs and facilitate the availability of biomass for cattle. This will provide a significant contribution towards GDP and the exports will help to improve the trade balance.

The Prime Minister, Mohammad Boun Abdallah Dionne, accompanied by a strong delegation made up of the ministers Aly Ngouille Ndiaye, Aminata Mbengue Ndiaye, Moustapha Diop, the governor of Louga and other leading figures in Senegal, praised this “important project that points the way forward for an emerging Senegal through plans to develop the agricultural sector, driven by the local community in partnership with other institutions and bodies”. He praised the work that led to this project becoming a reality. “What we have seen here in Syer is the agriculture of tomorrow, as conceived by the President of the Republic through the Emerging Senegal Plan (PSE); in particular, its agricultural component, the Accelerated Programme for Agriculture in Senegal (PRACAS)”, he said. This 1000-hectare project has been developed in three phases, the first of these being launched yesterday, which, he added, will generate more than 100 immediate jobs.

He is also of the opinion that this investment will reduce our country’s trade balance deficit because we will be growing maize (corn) here intended for Senegal’s agro-industrial sector and high value-added products such as potatoes.

“It is good, he said, to be able to export potatoes, but it would be even better if we could get the state-controlled co-operatives (SIPS) to be more globally oriented. We want to maximise the value of our economy”, he said. He pointed out that this project has been set up to operate alongside the livestock sector. Some organic products will be grown there and certain by-products will be destined for livestock.

For the Prime Minister, “this is the path described by the Head of State, namely allowing small family farms to operate alongside a major investment programme, within the context of the local communities. This represents the emergence of the Senegal of tomorrow, the creation of added value, jobs and a future for our youth”.

The mayor of Dyer, Sidy Kâ, sees this project as being part of the pathway for fulfilling the emerging Senegal Plan, because its aim is to alleviate the poverty of the population and create youth employment. It is considered that the scheme will also help to reduce the incidence of cattle theft prevalent in the area. “By being provided with work through this project, he said, young people will no longer need to engage in illegal activities.” The mayor also asked for progress to be made in the construction of the Keur Momar Sarr-Diélaly-Mbar Toubab-Syer road and for electricity to be brought to the villages of the locality, particularly the area’s main town, Syer, as well as the setting-up of health centres.

The Chairman of Biosoy’s board of directors, Dr. Abdourahmane Kane, stated that those implementing the project “simply cannot be allowed to fail”, bearing in mind the trust placed in them by the Senegalese authorities. He recalled the process leading up to the launching of the project and he applauded the support of the people. Dr. Kane explained that, in the horticulture sector, a yield of 1500 to 1700 tonnes of onions and 1200 tonnes of potatoes is expected during the first phase. The aim of this initiative is, he hopes, to make Senegal a showcase for organic crops.

The director-general of Fonsis, Ibrahima Kane, has reason to be pleased with this partnership model and the investment made in a priority sector of the Emerging Senegal Plan. “Agriculture should represent an opportunity for bringing sustainable prosperity to rural areas”, he stated. In his view, the Biosoy project’s ambition is to position Senegal as a leading force in an agricultural sector acclaimed for its growth vectors and double-digit growth in the export market, while contributing towards our country’s production of seeds. This is not to mention significant gains made in terms of employment, income and support for livestock production.

A glowing tribute was paid to Xavier Beulin, president of the Avril group, who sadly passed away a few days ago.