Growing plants on roof-terraces goes back to ancient times, with the hanging gardens of Babylon. Today, the techniques have been mastered, and the applications more and more recognised and adopted. Just like in Germany, we would like to see the planting of greenery on buildings become more developed in France, for the good of everyone. State of the Art and perspectives.

Replacement parts represent 40% of the pivot market in Europe. The Chamber of Agriculture, CUMA d’Aquitaine (Cooperative set up for the Common Use of Agricultural Equipment), GRCETA (Regional Group of Agricultural Research Centres) and certain manufacturers and installers have developed protocols for checking these old devices.

The Kiwifruit (Actinidia chinensis) is a climbing plant that resembles the grapevine. It is a native of China, where it has been enjoyed as an edible fruit for more than 2,000 years. Around 1750, the Jesuit Father, Pierre Le Chéron d'Incarville, was the first European to describe this plant. It grew on the edge of forests situated on either side of the Yangtze River. After having evangelised the Chinese, the missionaries would bring the Actinidia to Florida, New Zealand and Europe as a decorative plant. At that time, the fruit was called « Chinese Gooseberry » on account of its colour and the fact that it had a similar taste to the gooseberry

The organisers of Sival gave a very positive review of the 34th agri-horticultural show, which took place on 15th, 16th and 17th January 2020 in...

Swiss cleantech firm Aqua4D is bringing its water-smart irrigation solution to ever more growers in 2020:

The Board of Directors of Husqvarna AB has appointed Henric Andersson to succeed Kai Wärn as the President & CEO of the Husqvarna Group...

The technical director Anton Hoppenreijs is retiring after 37 years’ service with Aquaco B.V. Over these last few years Mr. Hoppenreijs has been...

From the 30th of January to the 2nd of February Palaplast participated as always in an exhibition of significant importance AGROTICA 2020.
...

Rivulis recently marked three major milestones in regards to its global manufacturing footprint; the opening ceremony of the Rivulis factory in...

On 2 December, following three rounds of inter-institutional “trilogue” negotiations, the Council and the European Parliament reached a ...

Europe’s largest provider of grounds maintenance and landscape construction services, id verde, has signed a contract with The Toro...

END_OF_DOCUMENT_TOKEN_TO_BE_REPLACED Veritable who’s who of the profession, this guide lists all the major players in the global irrigation industry. If you wish to le listed in this guide, you can register online.
Register Show the buyer's guide 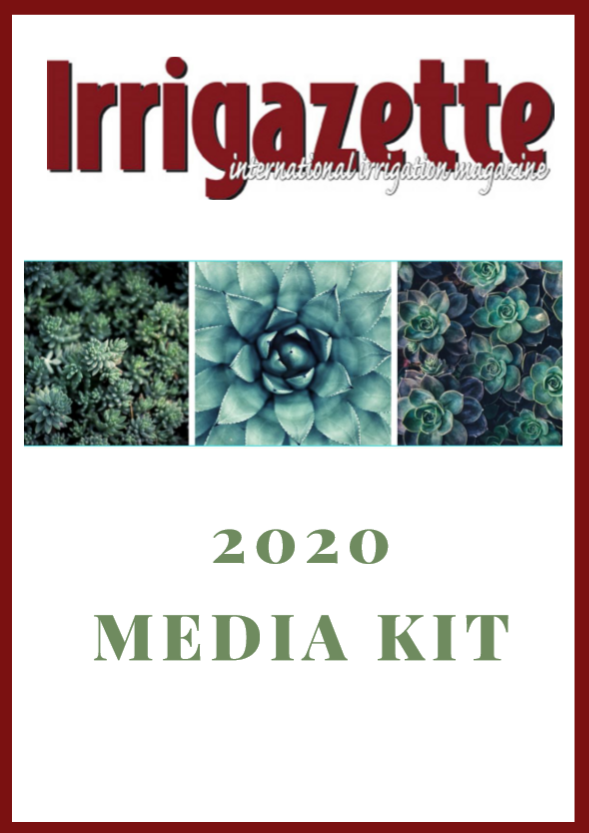 Subscribe to Irrigazette and, on a regular basis, you will receive all the news about irrigation as well as plenty of advice.
Subscribe