Nesting in a vast expanse of lush greenery between Provence and the Côte d’Azur, the Domaine de Saint-Endréol property invites you to spend a relaxing break intermingled with rest and peace and nature activities. The Golf Course, constructed at the beginning of the nineties, had a very obsolete and inefficient irrigation system. It is in the process of being completely overhauled. 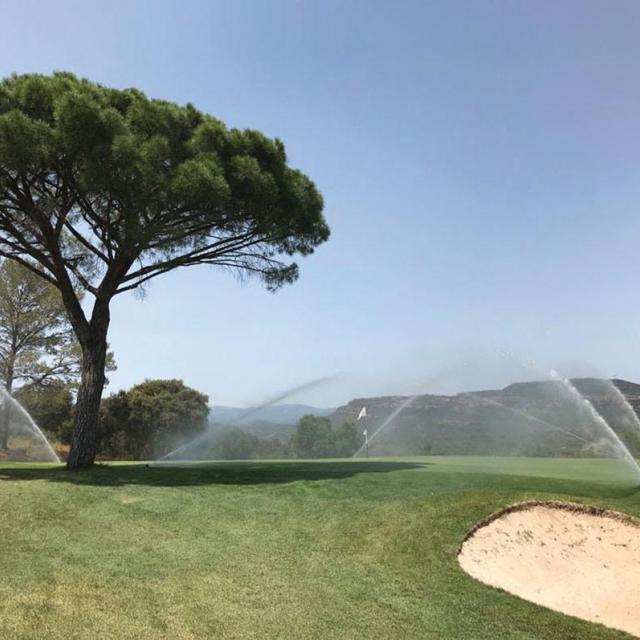 The Domaine de Saint-Endréol extends over 150 hectares within a privileged natural environment. Funded with Japanese capital, it has a 50-room residence with an open-air swimming pool as well as up-market rental accommodation, classified as a 4-star tourist establishment.

There is an 18-hole golf course covering sixty hectares, as well as a spa and tennis courts. The Resort also offers a restaurant, bar and conference centre.

The internationally renowned 18-hole golf course, the jewel of the French golf courses, is located in an area of absolute serenity along the banks of the river Endre, which gave its name to the property. Designed by Michel Gayon and inaugurated in August 1992, the course moulds itself around the seductive but erratic forms of nature, which are the true architect here.

A complete upgrade of the irrigation system

On a hot June day, I met Roland Demonty, golf irrigation products manager for Toro International. I found him in the Club House, in the company of the course’s green keeper, Mr. Jean-Luc Boulat. We headed towards the golf course in a small golf buggy. The course is very hilly.

According to Roland Demonty: “The irrigation installation dates back to 1989, when the course was created. A complete upgrade was conducted last winter”. The old installation consisted of very obsolete Rain Bird impact sprinklers controlled by solenoid valves, with 6 to 8 per valve. Irrigation was not very precise.

All the sprinklers were replaced by Toro Infinity versions on the greens and Toro Flex 800s on the Fairways. These sprinklers are equipped with built-in solenoid valves, which allows them to be controlled individually, sprinkler by sprinkler, and each one has dual trajectory (angle positions of 15° and 25°) helps to prevent wind drift. Another advantage of the Infinity sprinklers: maintenance is so much easier because when the cover is removed, everything is within reach: decoder, electrical connections, solenoid valve, pressure regulator.

The green keeper explains: “With this new system and customisation of the sprinklers, a drenching routine is possible, which means that we can continue irrigating the zone that has turned yellow, without over-watering the adjacent area.”

The sprinklers are laid out in a triangular pattern on the fairways at a spacing of 21 metres. Depending on the width of the Fairway, the installation has two or three rows of sprinklers.

The tees and greens were also upgraded. A back-to-back system is in place on the greens, i.e., one sprinkler exclusively for the green and behind this sprinkler another one that irrigates the approach.

The pipes have also been changed. They have been replaced with Elydan’s electro welded PE pipes. This equipment, which is more reliable, can be filled with water within one hour of being installed.

During the work, the holes were closed one after the other and made available to the players at the weekend.

The golf course is irrigated with the water

We then headed towards the golf course’s water reservoir and the service room which houses the pumping station. In the middle of the lake we could see an aeration device to help control algae growth.

The golf course is irrigated with water from the Canal de Provence, taken out of the Saint Cassien Lake. “The lake, with a capacity of 15,000 m3, can only hold enough water for a week. If nothing is done, it loses 2 to 3 cm per day”, explained Mr. Boulat.

This year, the drought and prematurely hot weather are of particular concern. There has been virtually no rain in Provence since December. If we add to this the fact that the region is very windy, then this exacerbates even more the phenomenon of evaporation and diverts the trajectory of the sprinklers. Mr. Boulat continues: “We will probably have to restrict the use of water this summer. We have already had a water vigilance alert level issued by the Préfecture. When we get to the next level, we will only be allowed to withdraw 30% of normal consumption; this means that we will no longer be able to irrigate the Fairways, only the greens and tees”.

Normally, the golf course is irrigated with water withdrawn from a well in the catchment area of the Endre, a small river which allows the course to have an additional source of water at the beginning and end of the season. “However, this year, as it is already extremely hot, the water requirements have been higher early in the season. We had to be connected directly to the Canal de Provence system. Furthermore, the Endre is almost dry.”

We then moved on to the service room, which houses the pump and filter station. “The pump station was upgraded during the first lockdown”, explained Mr. Boulat.

And he added: “There are two filter systems, one for the golf course and one for the green spaces around the accommodation area”.

In the service room we could see the control box and four pumps: three pumps for the golf course and one for the green spaces. According to Mr. Boulat: “The irrigation cycles last 6 hours, falling within the time slot 21:30 h and 07:30h. 1,300 m3 are used during each cycle.”

The installation is managed by a Lynx decoder central control system. A total of 650 Toro LAC decoders were implemented last year. This system can operate with both Rain Bird and Toro decoders, which is a huge advantage when renovating in stages. These decoders were developed specially for the European market with sophisticated built-in diagnostics.

An application on the Green Keeper’s telephone enables him to adjust his sprinklers: “With this new system, we are looking at 10 metres as opposed to fifty metres.” And he adds “We can irrigate each small zone, one after the other, but it takes time to set the cursor.”

Mr. Boulat has always worked with Rain Bird software. He must understand this new system and with practice he will get to master it perfectly. He explained “what takes time is filling in the details so that all the stations are well provided with the information”.

Furthermore, a weather station enables the ETP to be calculated and provides weather data for the following night’s irrigation. And the software regularly updates the irrigation run time, in seconds, for each sprinkler.

Another advantage of the decoder system is: “If there should be a problem with the decoder, the software diagnoses the fault and reports it immediately so that it can be investigated.”

We ended our visit at number 13 hole, the flagship of the architect’s design. The hole overlooks an artificial lake created by widening the Endre. The tee is very high compared with the lake and it is only possible to play a good shot by hitting the ball directly onto the green in one drive. The view is stunning. The water level in the lake is particularly low this year.

The water consumption over 7 days is 9,000 cm3 and the budget for water is €45,000 to 90,000 per year. The new irrigation system should allow for a saving of 25% on water. In this complicated region, as far as the climate is concerned and considering the complexity of the course, it is important to save on water, and it will be even more so in the coming years. 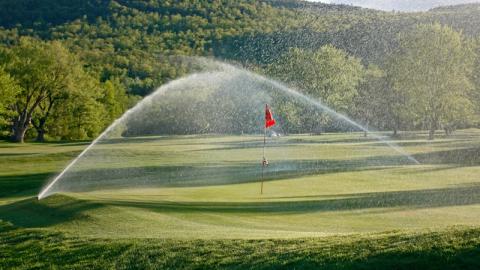 Golfs : How to save water?